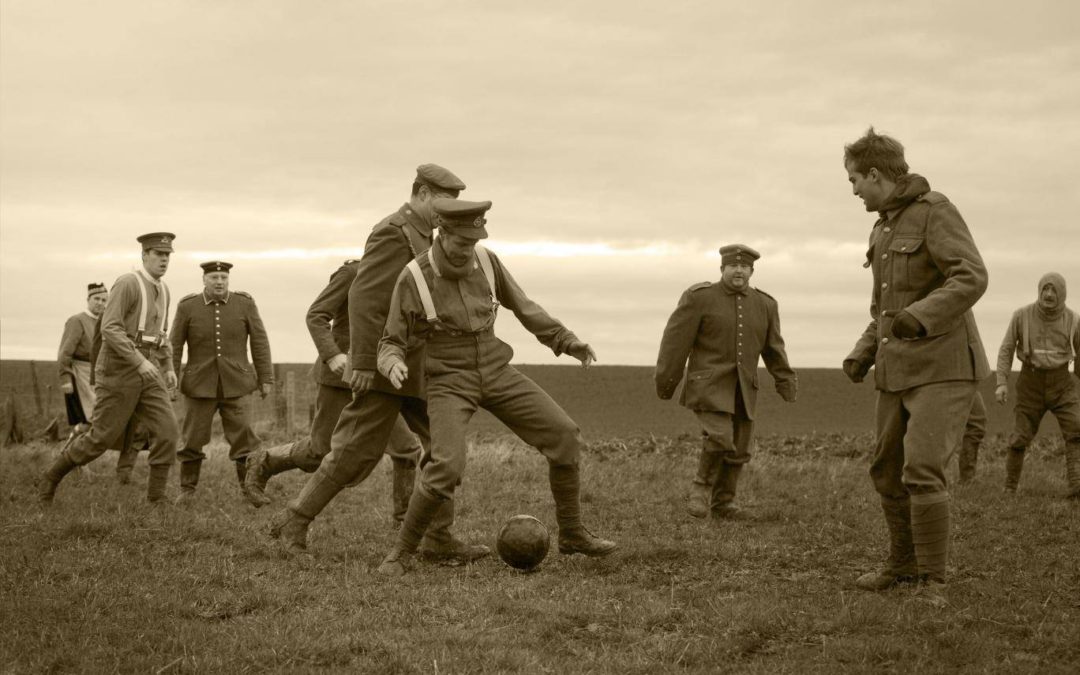 “War is an absolute failure of imagination.”

In December 1914, Europe was five months into the “War to End All Wars” when something extraordinary happened. During a brief lull, British troops looked across the field to see candles sitting atop the trench on the German side. Then, they heard the words, “If you won’t shoot, we won’t shoot.” Soon afterward, Christmas hymns. First by the Germans, then the British. Then. . .together.

Not long afterward, troops from both sides began to courageously lift themselves from the trenches and walk toward the center, completely exposed to enemy fire, until they found themselves trading British cigarettes for German beer. . .even playing a game of soccer. Decades later, it was discovered that scenes like this were taking place all up and down the line for hundreds of miles.

But it took someone to be nice first.

Or, from another perspective, all it took was imagination. I think Adrienne Rich would agree that being the first to be nice was the act of imagination that led to the exchange of goods, the burial of the dead, handshakes, laughter, and brotherhood. Unfortunately, once the generals discovered what was going on, unofficial truces like this one were unheard of again as soldiers were told that they were not sent to the front to exchange gifts. They were sent there to kill the enemy. Indeed, the atrocities of war took maddening turns for the worse from that point forward.

But how does this pertain to our own lives? Being nice first fits well with Philip Gulley’s definition of grace:

“Since it is not instinctive, grace begins with mindfulness and our deliberate attempt to act with loving kindness when we could have justifiably done otherwise.”

Being nice first means that we must place the needs of another ahead of our own, which, according to Gulley, is not instinctive. Certainly, the soldiers of WWI described above were acting with grace and loving kindness in the midst of the mindless “justification” (lack of imagination) of killing one another under the auspices of war. Fortunately, someone during that first December had clarity, and they acted upon it. They were nice first, using grace as their guide. Even if it was interrupted, it happened, and it was an example that – had it been given the time and enlightenment it needed – may have led to a more imaginative ending than needless murder.

Think of it in terms of long-running, oftentimes persistent resentment towards another person. Why does that resentment exist? From my own personal experience, the only thing necessary to sustain resentment is complacent cowardice: the inability to move through fear to find courage. In other words, refusing to be nice first. Grace is our guide to overcoming our own egocentric tendencies and resentments. I speak from experience, as I have also been damaged personally by my own cowardice and inability to act – all because I was afraid to be the first. To go first. To speak first. To act first.

To be nice first.

I recently took that first step again in an attempt to remedy damage I have caused to a friend so many years ago. Thankfully, the need to do so is becoming more and more infrequent as my time with hospice clients continues to guide the time I have left in my living years. I took that first step because I have the power to do so. I have the power to be nice first. We all do. While not all first steps guarantee resolution or lead to truces, relationships between individuals, communities, and countries seem doomed without them.

I imagine what that scene in December 1914 would have looked like. I imagine the feeling. The imagine the hope. I imagine a different outcome where instead of rejecting that expression of grace, a truce between a small segment of men on the trenches of WWI expanded throughout the entire line, through the command structure and throughout the world – saving the lives of tens of millions of people.

All because one person decided to be nice first.